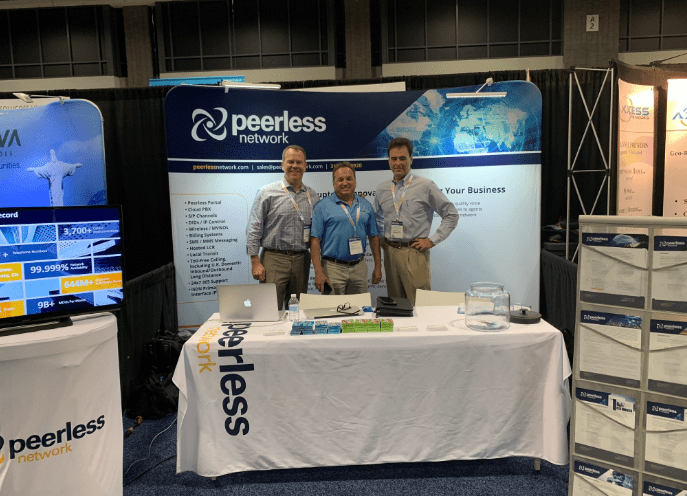 Another successful Channel Partners Evolution show for the Peerless Network team is in the books! The channel-focused show in Washington, D.C. on Sept. 9-12, allowed us to connect with more than 3,200 MSPs, VARs, agents, integrators, consultants and suppliers. The Peerless Network team had the ability to network with thousands of key players in the channel space around the clock.

Our Peerless Network booth was all abuzz with activity throughout the event with visitors stopping by to learn more about the Peerless Portal, a fully automated online self-provisioning portal to easily purchase and manage SIP trunking channels, telephone numbers, local and domestic/ international long distance, toll-free services and call termination for multiple locations from one advanced system. From the simplification of implementation to real-time traffic stats, agents now have greater visibility and success at their fingertips.

Also — our Cloud PBX, a UCaaS platform on the Peerless Portal, was getting a lot of attention at the show. It enables enterprises to set up and manage a telephone system over a cloud-based IP network. Our team in the booth demonstrated the platform and highlighted the Cloud PBX advantages, which include allowing enterprises to access PBX capabilities without the need for complicated and expensive equipment and offsetting third-party costs by leveraging the network on Peerless’ own reliable network infrastructure and technologies.

It wasn’t all business – we had some fun while networking, too! The Peerless Booth was attracting crowds with our drawing for booth visitors. John Frustaci of Communications Deployment Partners won the $500 cash prize from the Peerless team. Congratulations!

Did you miss us at the show? Contact us at sales@peerlessnetwork.com with any questions or inquiries.